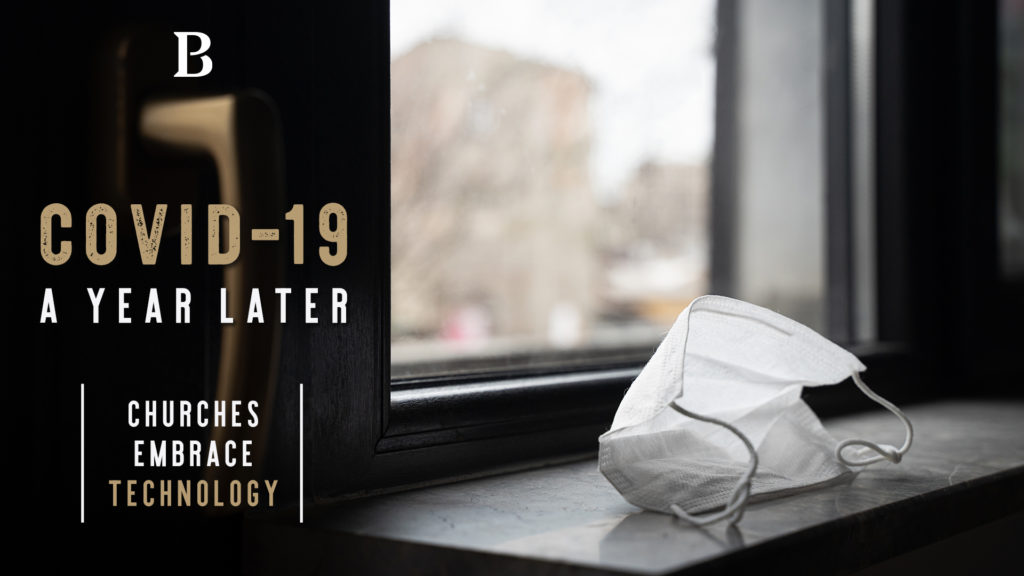 Many if not most churches opted to go digital-only that day after witnessing such steps as President Trump declaring COVID-19 a national emergency and professional and collegiate sports suspending activities. As church leaders looked to make services available for members, Facebook scrambled to keep up with the increased demand, which was created in large part by those congregations livestreaming on the social media platform.

The following weeks brought a sink-or-swim time for churches regarding technology. Those not using it before had to learn – quickly. Offering plates were traded for giving through an app. Living room couches became pews. Laptops at the kitchen table hosted Sunday school classes, prayer group gatherings and church staff meetings. The word “zoom” – up to then classified as a verb – became a noun (“Let’s meet on Zoom”) and then a verb again, as in “We’re going to Zoom Sunday night.”

Of the seismic changes brought by COVID-19, the expansion of online platforms for churches is perhaps the biggest. With Barna Research showing that just 3 percent of churches remained open as usual in late March 2020, finding other options to meet became paramount.

One year later COVID cases are on the decline, and people are venturing out from their homes more often. Yet, even as the number of churchgoers attending in-person has continued to rise, leaders are quick to say that the need for an online presence isn’t going anywhere.

Tommy Green, executive director-treasurer of the Florida Baptist Convention, said the inclusion of online tools by churches and entities like his are going to be a necessity going forward.

“Everyone prefers to meet in person, but we still have those who are hesitant to do so,” he said. “There seems to be great engagement with people online. To be clear, that doesn’t replace the ability to build relationships when you’re together, but it can be a positive if done well.”

Respondents to the Barna report agreed that in-person gatherings were preferred, with 81 percent calling them “very important” for experiencing God alongside others. Fifty-two percent may seem like a low number for churched adults choosing primarily physical gatherings, but 35 percent said they would like a hybrid of those conducted in physical as well as digital settings, a blended term known as “phygital” ministry.

“It doesn’t replace existing community,” the report said. “Rather, it is an enhancement of community by reimagining the tools that the body of Christ can use to reach people with the hope of Jesus. Phygital ministry uses technology as a tool to support the mission of the Church in both the physical and digital realms – to grow across multiple contexts and to multiply everywhere that people gather, online or in person.”

Sixty percent of churched adults hoped their church would continue to use digital means of gathering post-pandemic, according to Barna. This would help not only keep members engaged who can’t attend in person, but also benefit those preferring to visit churches online. When it comes to classes designed to explore the Christian faith, for example, 40 percent of unchurched adults with high digital openness said they would be more willing to attend online rather than in person (23 percent).

Over the last year, the Florida Baptist Convention not only offered training for churches to strengthen their online footprint, they also provided cameras, microphones, sound systems and other equipment for those who didn’t have the budget nor foreknowledge of a once-in-a-century pandemic.

“For many churches, [technology] wasn’t part of their culture,” said Green, whose father died of COVID in January. “We wanted to help fill in those gaps and assist them in having a quality product to share their ministry.”

In 45 years with Colorado Baptists, Steve Hoekstra has served in numerous capacities including pastor and church planter. Currently he’s the director of the convention’s Western Office, located in Montrose, as well as the statewide Resort and Leisure Ministries director. He said his conversations with pastors shows an acknowledgement and shift in doing ministry.

“Pastors aren’t wanting to get back in church so they can stop ministering online. Most of the ones I talk to are excited about continuing [those online platforms],” Hoekstra said. “The biggest thing I’m hearing is that we can’t let this [opportunity] go.”

Hoekstra joins the general consensus that in-person gatherings are preferred. However, obstacles like distance are neutralized with these new tools. Colorado winters can also be a hurdle.

“My guys are getting people who have never visited their church, or any church,” he said. “They’re getting emails from all over the country from people who have watched their service. One even heard from someone in Malaysia, who said they enjoyed [that pastor’s] church.”

Online tools and the accessibility they give a church may lead pastors to think it’ll open up a whole new era of church-hopping. However, the Barna study revealed that 90 percent of respondents remained engaged throughout the pandemic with the church they attended beforehand. The report said those connections are fostered through various steps, such as sharing new media during the week like podcasts or Instagram videos as well as appointing new positions such as online pastors.

Green said not only is the new paradigm likely permanent, but it’s one that can benefit churches in all settings. Today, anyone with a smartphone can match or even exceed the reach that previously had been reserved for those with a sponsored radio or TV platform.

“Only time will tell how many [online tools] will be needed and how much we’ll go back to meeting in one place,” he said. “But we’ve seen the value in it. Churches of all sizes have learned to use this technology.”

If you want to see proof, he added, “Scroll through Facebook on a Sunday. You can’t help but find a church.”